What this product does

Similar with other home wifi system in the market today, Amplifi is a mesh wifi system combining wireless router with its Amplifi mesh points to blanket your home with solid wifi system, easy to install and comes with convenient smart-touch display for real-time networking status. It is based on wireless AC technology with multiple self-configuring radios and advanced antenna technology.

The router unit is designed with stylist model you can place on the table or on the shelf to blend with your room decoration.

When you compare with Orbi by Netgear, you can find that Orbi delivers data rate throughput up to 2,999Mbps as opposed with Amplifi models as shown in the table’s speed row.

When considering aggregated bandwidth is the only reason you upgrade your home wifi network, instead of purchasing a wireless AC5400 router you may consider Amplifi HD with the same total bandwidth and covering larger area of your large home.

Unlike standard model (AFi) which technically covers range up to only 10,000 sq. ft, both long range model (AFi-LR) and AFi-HD models deliver wifi range up to 20,000 sq. ft covering each corner of your large home.

See Orbi’s spec saying that each Orbi plus one satellite can cover up to 4,000 sq. ft. area. Compare with Amplifi standard with two Amplifi mesh points, they can cover much wider coverage than Orbi can cover with one Orbi satellite. Even Amplifi HD (one router plus two mesh points) offers almost as wide 5 times as Orbi can offer. Moreover, Amplifi HD plus two mesh points are tagged with almost the same price than Orbi. And even it is cheaper than the new Wireless AD router such as Netgear Nighthawk X10.

Note that with your current wifi router, if you don’t want to replace your existing wireless router you can add Amplifi HD mesh point to work as range extender. 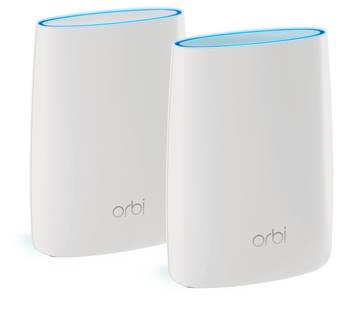 To learn more details about each of the product, click the following link learn more spec details, manufacturer’s description and current price and customer rating.

See that the price of each of products is more economical than purchasing high end wireless AC5400 router.